“Trey ain’t such a bad guy.”
A jail inmate, charged with murder. 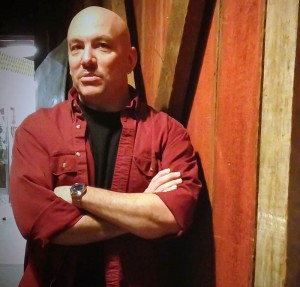 These are not only the people we meet in Barker’s fiction, but some of the people he deals with in the World on a daily basis.

But in Barker’s world, both fictional and real, there are also lovers and heroes, the divine and profane, the wonderful and the wonderfully average.

Barker was born in west Texas in 1966 and was raised with music and books and not much else. For a time, his mother was a bookkeeper at a number of clubs (dives all but lovingly so) and there was always music playing. At home, sitting in front of his mother’s bookshelves, dipping into and out of science fiction, humor, horror, crime, there was also music.

His fiction is full of both music and criminals.

He attended Robert E. Lee High School, a school mentioned numerous times in B.E. Bissinger’s brilliant book Friday Night Lights. And while football is King in west Texas, he spent his football nights in the stands as part of the percussion section of the band. He still plays drums.

After high school, Barker moved north to Lubbock and graduated, eventually, from Texas Tech University with a Bachelor’s in Broadcast Journalism. He worked as a journalist off and on for a few years before moving to Denver with his then-wife, LuAnn.

After a decade there, he moved to north-central Illinois and began working at the Bureau County Sheriff’s Office, where he still is today. He’s a patrol sergeant and an investigator for the Illinois Attorney General’s Internet Crimes Against Children Task Force.

He is the author of more than 200 short stories, as well as the Barefield trilogy – 2000 Miles to Open Road, Exit Blood, Death is Not Forever – published by Down & Out Books. Those books are reflections of the darker side of west Texas and are as stripped down and fast moving as anything you’re likely to read. Think David Goodis, Jim Thompson, James Crumley, Ken Bruen.

He also writes the Jace Salome novels, the first of which was Slow Bleed. Look for the second, East of the Sun, sometime in 2016. Those are published by Five Star and he is busily at work on the next in the series.