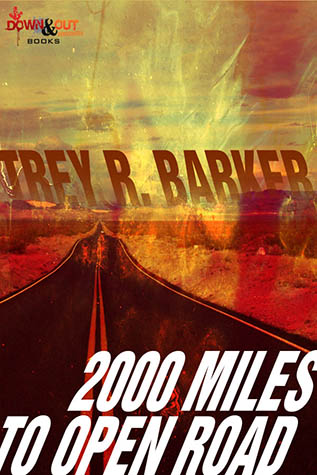 With a murder indictment hanging over his head, a pissed-off cop on his tail, and an unknown woman diving through his car window during a shoot-out at a sewage plant, Halford Turnbull has just one goal: To prove his innocence.

Not to the prosecutors, not to the cops.

But brother Handford is halfway across the country and between Carson City NV and Huntsville TX is a pile of trouble that Hal simple can’t seem to avoid.

All he wanted was to buy a DVD of a murder. Twenty grand in stolen money to pay for it but the buy goes badly, leaving him fleeing a hail of bullets. A few miles down the road and he finds himself, and the stripper who jumped in his car, at a church filled with self-flagellant priests in Valentine, Texas. Another frenzy of bullets, a riot of bodies, and Hal flees again.

It is a 2000 mile journey which may lead to redemption or just get him killed, and yet there is no way Hal Turnbull can avoid driving those miles.

“Double-crosses, triple-crosses, a storm of bullets, and one bloody grab at redemption…and Hal Turnbull still has 2000 miles to go. This is a mean, greasy V-8 of a book and Trey R. Barker’s at the wheel. Buckle up.”
—Sean Doolittle, author of Burn, Dirt, Rain Dogs, Safer, and Lake Country

“…a bullet of a novel, wrecking havoc through the Southwest. Calling it noir and hardboiled is like saying Paris Hilton likes to party once in a while.”
—F. Paul Wilson, acclaimed author of the Repairman Jack series